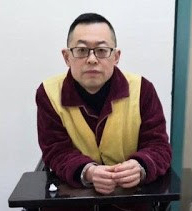 Charged with: “using a heretical organization to undermine the implementation of the law”

Please read our writing guidelines before writing to prisoners

Create a print friendly pdf of this profile.

Start your letter with a sample letter in this prisoner’s language:

Pastor Wang Yi is the influential leader of Early Rain Covenant Church in the city of Chengdu, Sichuan province – one of the best-known house churches in China. He and his wife, Jiang Rong, were detained in December 2018 and charged with “inciting subversion of state power” and “illegal business operations.” If convicted, Pastor Wang could face up to 15 years in prison.

A former law professor, Pastor Wang has been vocal in calling on the state to uphold religious liberties. Early Rain Covenant Church had been under pressure from the authorities for some time but matters escalated on Dec. 9, 2018. That night and the next day, police raided church members’ homes and arrested them. By the end of the week, about 150 church leaders and seminary students were in police custody, and the church had been forcibly closed.

Since then most of those arrested have been released, including Pastor Wang’s wife, Jiang (released June 11, 2019), and church elder Li Yingqiang (released Aug. 19 2019). However, several others including Pastor Wang and Deacon Tan Defu, remain incarcerated. Those who have been released remain under surveillance. In July 2019, the defense lawyer for Pastor Wang Yi was barred from meeting with his client and officials assigned different lawyers to his case, even though he specifically chose his own lawyers prior to his arrest.

Church members are very worried about their pastor and have received very little information about his condition or the progress of his case. Since the crackdown, some Early Rain church members have been sent back to their hometowns and banned from Chengdu. Others have lost jobs or been evicted. Church elder Su Bingsen was released in April 2019 and was flown home to Fujian in the company of security officials; his family was evicted from their home while he was in custody. Some of those who were released say they were abused and deprived of food and water.

Early Rain may have been targeted because of its open approach to church mission, which included posting sermons online and street evangelism. The church also ran a Bible school for about 100 students and had a primary school. Its meetings around the city regularly attracted more than 800 people each week. Pastor Wang himself has been a prominent campaigner for greater religious freedom. In 2018, he wrote a declaration signed by hundreds of Chinese pastors, which includes a statement of Christian beliefs and a call for an end to persecution; it also recognizes the Chinese government’s authority. Many of those in China who have signed the ‘Declaration for the Sake of the Christian Faith’ have suffered persecution since.

None of his close associates are certain where Wang Yi is being held, since officials have not released that information, and Wang Yi’s chosen lawyers were prevented from either seeing him or working on his case. The provided address is one of the locations where he could likely be held.

On Dec. 30, Pastor Wang Yi was sentenced at the Intermediate People’s Court of Chengdu City, Sichuan province after a secret Dec. 26 trial. He was charged with “instigating subversion of state power” and “illegal business management” for being the senior pastor of Early Rain Covenant Church. Along with the nine year sentence, he was sentenced to deprivation of his political rights for three years plus a $7,000 penalty.

Authorities have placed Jiang Rong, the wife of Pastor Wang Yi, under house arrest. Jiang had previously been freed on bail. Although Jiang was released on

June 2021  Though Chengdu prison officials have stated that Wang Yi is doing well in prison, a secret source says that’s not true. According to

Other Ways You Can Help:

Write to the Chinese Embassy:

See All Chinese Prisoners of Faith