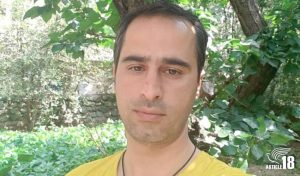 Reeza Zaeemi was released from prison on August 8, 2021, on condition, ‘he wears an electronic tag for the remainder of his nine month sentence’. He is banned from leaving Iran for two years following the completion of his sentence.

Reeza was arrested outside his home on 27 November, 2020. He was sentenced on 25 January, 2021, to eighteen months in prison on charges of ‘propaganda against the Islamic Republic. On 25 April, 2021, his sentence was reduced to nine months.